LSE-inspired school to be set up in Hsinchu

National Tsing Hua University and a private foundation yesterday signed a contract in Taipei to found the Taipei School of Economics and Political Science (TSE).

Signed by TSE foundation chairman Huang Huang-hsiung (黃煌雄) and university president Hocheng Hong (賀陳弘), the school represents the first collaboration in the nation between a private foundation and a public institution to set up an educational institution.

The TSE is to be established inside the Hsinchu-based university, becoming the 11th college on campus, Huang said, adding that it plans to admit 10 graduate students in September next year, before gradually raising the number to 30 doctoral and 150 graduate students each year. 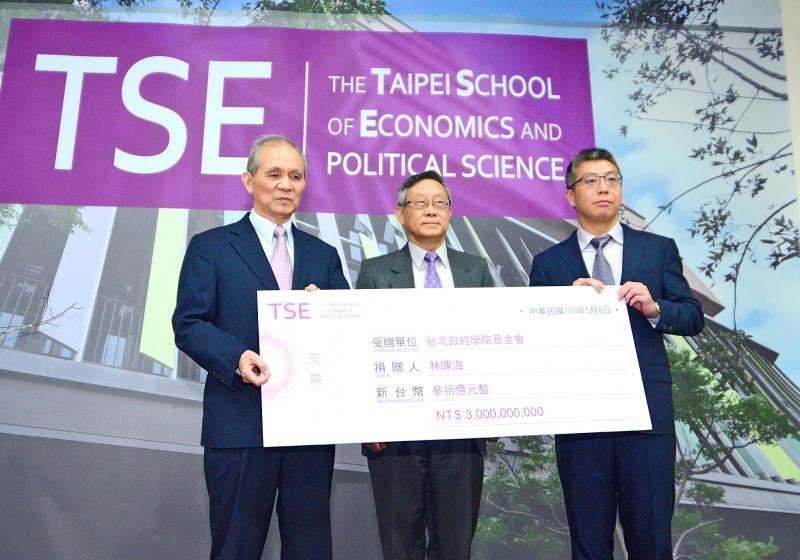 International students are expected to make up two-thirds of the studentry, with all courses taught in English, he said, adding that graduation diplomas will be conferred by the university.

The university has been the cradle of numerous talent in science and technology, making it an ideal partner to run the TSE, which seeks to cultivate professionals in politics, economics, new technologies and sustainable development, he said.

The inspiration for founding the school was the London School of Economics and Political Science (LSE), which was founded in 1895 by members of the Fabian Society for the betterment of society, he said.

Lin Chen-hai (林陳海), the main donor who set up a NT$3 billion (US$100 million) fund for the TSE, said the interest generated by the fund would be used as operating expenditure for the school, which is estimated to be about NT$100 million each year, said his son, Lin Chia-hung (林家宏).

The establishment of the TSE is a groundbreaking experiment on higher education innovation and globalization in Taiwan, while the scale of funds injected into the school for the development of social science is unprecedented, Hocheng said.

TSE combines the prestige of the public sector with the flexibility and resources of the private sector, making it the first of its kind in Taiwan, and extremely rare in Asia, Hocheng said, adding that he is certain it would greatly raise the nation's global profile.